Oslo, 26 June 2018 – Global experts in the anti-doping world met yesterday during the ‘Anti-Doping in Sports Conference’ in Oslo to define alternative solutions to protect clean sports and athletes.
While the world media is discussing whether FIFA was aware of the doping cover-ups in Russian football over the past 18 months, the World Forum for Ethics in Business (WFEB), Anti-Doping Norway and Fairsport invited global leaders to this heated debate. More than 250 high-level participants from around the world argued about the responsibility of the different federations and who is to blame for this crisis and contradictions in jurisdiction. With top athletes still cheating, there is a need for accountability and integrity in sport from the grass roots to Olympic level. 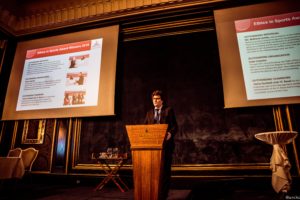 This multi-stakeholder conference not only addressed governance issues in sports but also celebrated role models by announcing the winner of the 2018 Ethics in Sports Award.

The Ethics in Sports Award in the category ‘Outstanding Individual’ was conferred upon David Howman, Chair, Athletics Integrity Unit, for his longtime service to the sport and for his battle against doping and corruption in sports. 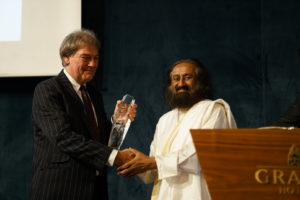 ‘It is a great honor for me to be awarded this prestigious honor from a body that has done a huge work on ethics in life – from business to sports and in between’, David Howman said after conferment of the Award by World Forum for Ethics in Business founder Sri Sri Ravi Shankar. ‘I am a great believer that sport is a mirror to society and that what you are doing in the Forum is moving from the society or business to sport; that is effective in your messaging and I applaud that’, he added.

The Ethics in Sports Award stems from the annual Ethics in Business Award conferred by the World Forum for Ethics in Business (WFEB) to honor individuals and companies that have demonstrated the importance of human values and ethics in life and in the business arena. The Award was instituted in 2006, and is presented annually at the International Leadership Symposium organized by the World Forum for Ethics in Business at the European Parliament. 18 winners have received this award over the past years. In 2014, for the first time, WFEB recognized outstanding sustainable contributions in the sports arena and once again in 2016. The Ethics in Sports Award recognizes an organization an / or individual that have been a leading role model in radiating and embodying ethical behavior in life and in the sports area. The recipients have inspired people to observe and practice human values, and to give equal, if not greater importance, to human values vis-à-vis success in sports. Winners are selected by the Board of Directors of the WFEB.

At a time when the world of sports is facing increasingly large governance challenges and has moved far away from its original objective, a focus on true sportsmanship and absolute adherence to the rules of the game on and off the pitch were at the forefront of the agenda at the Anti-Doping in Sports conference in Oslo.

Norway Prime Minister Erna Solberg opened the conference by saying: ‘Sports plays a vital role in people’s lives. Sports bring us together and are a quality of life. We are disappointed when athletes cheat. We need to stand together, united to fight for clean sports. I thank the World Forum for Ethics in Business, Anti-Doping Norway and FairSport for organising this event, she added. This is about the values we want our children to live up to and it’s not about cheating but about fair competition.’’

Adding to this in his keynote address, Sri Sri Ravi Shankar, founder of the World Forum for Ethics in Business and global peace ambassador who travelled all the way from India to Oslo emphasized that ‘For a while commerce has been attached to sports – it has been associated with sports but it should just be the frame of a picture. If commerce gets the bigger picture, match-fixing starts, erosion of ethics, either in business, politics and sports starts’, he added. ‘The goal is not sports if it becomes about business. We need to create awareness that winning is not the goal but playing the game with values is important. We need to inspire our young people to live s stress-free and happy life so that they can become role-models for the coming generations.’

WADA Vice President Linda Hofstad Helleland called for a new roadmap of trust which is based on common values and athletes’ voices as guide and further suggested a review of the current anti-doping system with independence and transparency at the core.

Speaking on the occasion, Hajo Seppelt, a German journalist whose investigations exposed Russian state-sponsored doping in high-level sports urged that ‘It is becoming increasingly clear that the fight against doping must be taken out of the hands of the sport. The classic conflict of interest between promoters of sport and those who supervise sports is obvious. It cannot be that the controllers control themselves.’

The Anti-Doping in Sports conference was organized by the World Forum for Ethics in Business in partnership with Anti-Doping Norway and FairSport. For the past 15 years, the WFEB has convened in worldwide conference and since 2006 annually at the European Parliament in Brussels to advocate and act towards ethics and good governance. The Anti-Doping in Sports conference is a continuation of WFEB’s conference series on ‘ethics in sports’. Earlier editions were held at the FIFA headquarters (2014, 2016) and at the stadium of Germany’s soccer club Union Berlin (2015). WFEB was founded in 2010 by Sri Sri Ravi Shankar.

The World Forum for Ethics in Business is a registered public interest foundation based in Belgium (N° 822.216.342). The mandate of the Forum includes all manners of pursuing and establishing the indispensable ethical foundations of business in a globalized world. Providing a platform for the promotion and defense of ethical approaches to business enterprise and corporate governance and facilitating global dialogue and fostering cooperation among the private sector, the academic world, government agencies, international organizations, the media, spiritual as well as secular communities and all other stakeholders are among the organization’s main objectives. The World Forum for Ethics in Business is governed by its President Rajita Kulkarni and its Board Members Abha Joshi-Ghani, Acting Vice-President, Leadership, Learning and Innovation, The World Bank; Jo Leinen, Member of European Parliament, Nirj Deva, Member of European Parliament; Madhu Rao, Former Chairman Shangri-La Hotels; Michael Steiner, German Ambassador (ret.), Roland Glaser, Former CEO Minerva Schools and Ram Lakhina, Chairman of The Netherlands India Chamber of Commerce and Trade. For further information visit www.wfeb.org.

No events scheduled at this time.